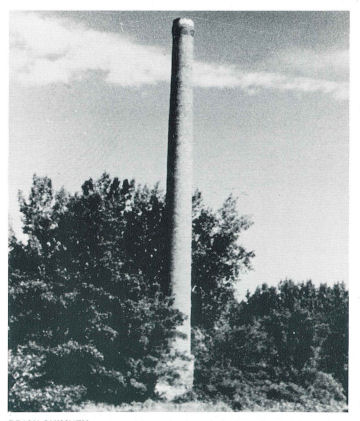 The other remnant of a long-gone brick company was a chimney, 109 feet tall, located on 86th Lane and East River Road. It stood in lonely dignity on a plat of land surrounded by trees. It aroused curiosity in passers by, but offered minimal clues to its past. In later years the brick chimney served no practical purpose other than a silent tribute to a once prosperous enterprise.

Lightning struck and severely damaged the top of the old brickyard chimney during a late evening thunderstorm on Wednesday, June 25, 1980. The following Wednesday, July 2, 1980, the storm-damaged brick chimney was taken down. It was demolished for public safety reasons. The demolished chimney brought down the curtain on the last remembrance of the brick factory operation that was a prominent part of Coon Rapids in the early 1900's.